Liposomes are delivery vehicles for transporting substances into the body effectively via facilitating absorption directly in the mouth or by preventing breakdown by stomach acid. Since the 1970s, liposomes have been investigated as potential drug delivery systems because of their biocompatibility and ability to incorporate both hydrophilic and hydrophobic therapeutic agents. Despite early promise, it was decades later, in the late 1990s to the present, that liposome technologies could create successful commercial products. Oral deliveries are recently emerging as availability of quality phospholipids and reliable homogenization and sizing equipment have become routinely available. Nutritional industry use of liposomes will grow rapidly in the next 5–10 y. High-quality products with more complex mixtures of pure compounds and complex botanical mixtures will offer clinicians less-invasive options for dosing and delivery of these actives.

First discovered by British hematologist Alec Bangham in 1961 (and first published in 1964),1 liposomes are delivery vehicles for transporting substances into the body effectively via facilitating absorption directly in the mouth2,3 or by preventing breakdown by stomach acid.4 Since the 1970s, liposomes have been investigated as potential drug delivery systems because of their biocompatibility and ability to incorporate both hydrophilic and hydrophobic therapeutic agents. Drug delivery using liposomes has numerous benefits, particularly in reducing the risk of toxic side effects, a significant issue for chemotherapeutics, which oft en exhibit high toxicity to healthy body organs and tissue.5,6

Liposomes, more broadly, are one part of a family of lipid-based deliveries, the most common of which is a simple emulsion such as that found in a skin cream or foods such as mayonnaise, where oil and water are brought together in a time-limited stability. Emulsions use surfactants (molecules with dual natures that can interact with both water and oil), such as lecithin, to stabilize drops of oil in water (and oil-in-water or O/W emulsion) or droplets of water in oil (a water-in-oil or W/O emulsion). Though basic emulsions have been understood for hundreds of years, when synthetic surfactants, such as polyethylene glycols (PEGs) entered into use, the creation of emulsions grew in sophistication and breadth of application, including into drug delivery. Incorporation of high-shear processing methods, such as sonication and homogenization, to break down particle size, along with more refined chemistry, allowed the size of dispersed droplets to fall in the 10- to 200-nm range. This ability gave rise to development first of micelles (particles composed of surfactants with their lipophilic tails forming the core) and nanoemulsions (particles with an oil core surrounded by a monolayer of surfactants, Figure 1), and subsequently to variations such as solid-lipid nanoparticles (SLPs, particles with a solid lipid or wax core and monolayer or surfactants) and nanostructured lipid carriers (NLCs, particles with a core blend of solid and liquid lipids, favored for resisting the crystallization SLPs are prone to that pushes contents out of the particle). One of the great aspects of the sub-100 nm particles is that the Brownian movement (random vibration inherent in particles) of the particle exceeds the force of gravity that moves the oils to the top and previously required weighting agents. This creates higher stability and longer shelf life and yields a characteristic clarity (the particles are smaller than wavelengths of visible light), whereas larger particle suspensions are opaque or milky.7 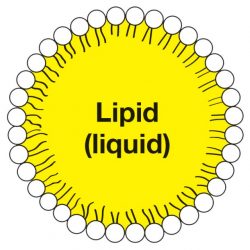 Liposomes brought a very interesting proposition into lipid deliveries: Instead of a surfactant stabilizing a drop of oil in water, the phospholipids arranged into spherical cell membrane–like lipid bilayers with their water-loving “heads” toward the aqueous medium and their fatty “tails” tucked toward each other. These structures created pockets of entrapped water along with water soluble compounds and the potential to protect them from hostile digestive conditions and potentially facilitating gastrointestinal (GI) uptake (see Figure 2). At the same time, the hydrophobic fatty acid core of the bilayers could host hydrophobic compounds, creating a small spherical package that could carry both hydrophilic and hydrophobic compounds. Interactions between the liposome membrane and cell membranes further sweetened the deal and offered a promise of enhanced cellular uptake through endosomal mechanisms.8,9 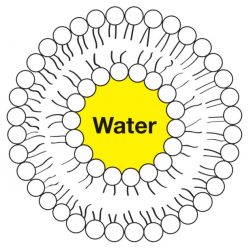 Despite that early promise, it was really only decades later, in the late 1990s to the present, that liposome technologies could create successful commercial products, and to date, most pharmaceuticals employ liposomes for injectable drugs, where the liposomes can modify distribution in the body and mitigate potential toxicities.6 Examples of pharmaceuticals in liposomal carriers are doxorubicin, amphotericin B, nystatin, and vincristine.6

Oral deliveries are recently emerging as availability of quality phospholipids and reliable homogenization and sizing equipment have become routinely available.2,3

Phospholipids can be isolated from lecithins produced from various seed oils (soy, sunflower, and canola being available commercially) and from egg yolks and milk. Lecithin and purified lecithin fractions are graded by the percentage of phosphatidyl choline (PC) they contain. Raw lecithins contain approximately 15% PC and higher grades of lecithin fractions contain 50% to 95% PC. PC has a rich history of use as a therapeutic and is considered the most beneficial of the phospholipids and is the most versatile for liposome formation. Soy phospholipids have the longest history of use and there are some excellent very-high PC sources of soy lecithin. Unfortunately, with the backlash by the nutritional industry on the soybean, an excellent, long-established ingredient has been demonized. Such high-PC fractions have no testable traces of the proteins or genes of the parent plant. Sunflower PC has taken the place of soy in many commercial nutritional liposomes, but the global supply chain is currently tenuous as big food companies also try to comply with consumer sentiment.

Phospholipids are therapeutic in their own right (not only as carriers) and arguably the most broadly beneficial of these is PC. PC is the main structural support of cell membranes and a micellizing constituent of bile with a long history of use in integrative and functional medicine.

Though phospholipids are almost a defining presence in the liposome bilayer membrane, other surfactant and nonsurfactant lipid molecules and surface modifiers have been used to create more stable, absorbable, or long-lived structures. The most common of these are food-grade PEGs, oils such as medium-chain triglycerides (MCTs), and membrane stiffeners such as cholesterol. Surface coating for mucoadhesion include alginates, chitosan, and hyaluronic acid.12

Liposomes are best characterized by size, and this is most easily done by dynamic light scattering (DLS), also called photon correlation spectrometry, which uses scatter patterns of laser light to determine mean size and size population distribution.10 Absolute size and morphology is usually confirmed with electron spectroscopy, but the quintessential tool for research and development (R&D) and stability testing in a liposome lab is the DLS unit.

Long-term stability is crucial and difficult to achieve, in liposomes. Instability in the surfactant system is seen most often in creaming, the rising to the top of free fats. On the other end of the spectrum, sedimentation is the falling out of insoluble compounds or combinations of compounds. Either of these end points represents the loss of potential in the system.10 A good, stable, liposome will be seen to be a continuous single phase from top to the bottom of a container, and the small liposomes, due to their inherent clarity, are easier to see quality or imperfections.

Liposomes, and other lipid particles, are cleared from the blood by the reticulo-endothelial system (RES), also called the mononuclear phagocyte system (MPS), a system of monocytes and macrophages in the lymph nodes, liver, and spleen that clear particles from the blood. Clearance is inversely related to size, with the small unilamellar liposomes/vesicles (SUVs) and micronized emulsions circulating the blood the longest.13 The best products must have a small mean diameter and a tight distribution of sizes. Even if the mean size of a product is small, products with a wide distribution of sizes may have a large volume of the liposomes in nonideal size ranges.

Until recently, nutritional manufacturers have used low to medium shear methods and with large lecithin loads, producing either gel-phase products with very high diameter particles of a large range of size (400–1000 nm) or, with rotor-stator dispersion devices, milky liposomal solutions of 200 to 400 nm. Small liposomes and emulsions are the results of refined chemistry and high shear equipment. Small liposomes may be drastically more efficient at intracellular delivery of encapsulated compounds. In a recent study, with carefully-sized liposomes, cellular uptake increased 9-fold as liposome size was decreased from 236 nm to 97 nm and was 34-fold higher at 64 nm.14

Modification of membrane surfaces with PEGs further enhances the ability of liposomes and micronized emulsions to avoid detection by the cells of the RES, thus protecting it from liver and spleen clearance and consequently prolonging its circulatory time.15 As a result of these studies, a so-called stealth particle has emerged. Stealth liposomes and micronized emulsions are made by covering the carrier surface with hydrophilic chains, such as PEG. A water soluble vitamin e derivative of PEG, d-α-tocopheryl polyethylene glycol 1000 succinate (TPGS) has emerged as a valuable, safe tool, for incorporation into liposome membranes. Such coated liposomes and micronized emulsions are more stable in biological environments and can exhibit up to 10-fold higher circulation half-lives than can liposomes without hydrophilic surface coatings.15

Future Use In Nutraceutical Industry

There is no doubt that nutritional industry use of liposomes will grow rapidly in the next 5 to 10 years. Most potential negatives revolve around industry adoption of reproducible, high-quality production techniques and testing methods for characterizing size, stability, and efficacy. As this hurdle is overcome, we will see exciting high-quality products with more complex mixtures of pure compounds and complex botanical mixtures.

Join our community and be the first to know about Dr. Shade’s articles, podcasts and events.